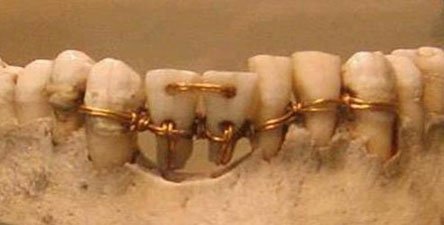 When it comes to teeth replacement, dentures are a very old solution. In fact, these prostheses, in some form or another, have been around since the ancient world. Just how far did we have to come to design the modern dentures we know today? If you are interested in a new set of dentures in Fort Worth, TX we provide modern dentures, with great esthetics, made with quality products.

Our team at Texas Denture Clinic and Implant Center in Fort Worth, TX explores a brief history of dentures and takes a look at how these appliances have evolved over time.

Teeth Replacement in the Ancient World

The first known dentures were used by ancient Egyptians around 1500 BC. These prostheses were made from human teeth that were held together by gold wire. These were replacing only a few teeth as the copper wire anchored to adjacent teeth.

In 700 BC, Etruscans began creating dentures out of human or animal teeth. As you can imagine, these appliances deteriorated rather quickly. However, they remained popular well into the 1800s.

During the 1700s, people began making dentures from natural materials, such as animal horn and bone. Later in the century, the first set of porcelain dentures were created by Alexis Duchâteau. These posed a problem, however, as they were prone to damage and were too white to look natural.

Of course, one of the most famous denture wearers was George Washington. You may be familiar with stories about his wooden teeth. This is a misconception! George Washington had several sets of dentures over the years. The current denture on display at Mount Vernon is made of a led base with human, cow, and donky teeth fastened to it. Check out this article and video straight from Mount Vernon!

It is important to note that while George Washington did not wear wooden dentures, they did exist. In fact, a Japanese priestess from the Kii Province was famous for her wooden prosthetic teeth. This style of appliance remained in use until the 19th century.

Dentures became more widely used during the Victorian period. During this time, sugar consumption increased by 500 percent in Britain. Due to these widespread dietary changes, tooth decay became rampant. As a result, dentures became much more popular and necessary.

“Waterloo teeth” became popular during this time. These teeth were taken from the bodies of deceased soldiers on the Waterloo battlefield and were then connected to a base of animal ivory. They became so popular, in fact, that they quickly became a status symbol among the elite and wealthy. Because of their high demand, poor people began selling their own teeth, and grave robbers stole teeth from dead bodies to make a profit.

The First Modern Set of Dentures

The first modern dentures are generally attributed to Claudius Ash, a silversmith in the 1820s. He mounted porcelain teeth onto plates of gold, then secured them with swivels and springs. As a result, these dentures were much more functional than their precursors.

Although some denture teeth today are crafted from porcelian, most of these appliances are made out of pink acrylic resin that secures resin fortified denture teeth. These are strong, 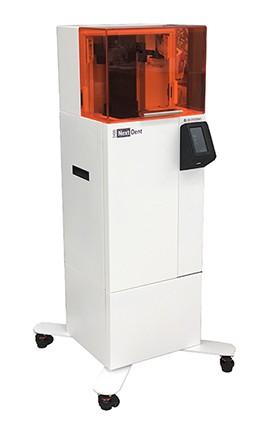 resilient, and generally much more affordable than their porcelain counterparts. Many patients ask "what is the advancements in denture technology?" - the short answer is there is only better looking teeth. Dentures today fit and function the same as they did in the 1950's. The advancements have been made in dental implants and how dental implant optios are able to benefit our patients. We have updated technology with a 5 Axis mill and a 3-D Printer. We think that in the next few years more dentures will be made by printing versus traditional, however the current studies show that printed acrylic is not as strong as lab processed acrylic. Not to worry - Dr. Damon is on the forefront of Denture Technology and we will bring our patients the latest and greatest technology once it makes sense to do so.

At Texas Denture Clinic and Implant Center, we offer a wider range of dentures, including full, partial, and implant-supported options. During a consultation at our practice, your doctor can help you determine which treatment is right for you.

If you are interested in learning more about dentures or any other teeth replacement option, schedule a visit at our practice. Give us a call at (817) 336 2121 or contact us online anytime.

*Disclaimer: results are not guaranteed, may not be permanent, and can vary per individual. Some images are of models, not actual patients.